Luciano Spigaroli, the youngest of Enrica and Marcello Spigaroli’s three sons, has for years been the driving force behind the Cavallino Bianco and all the Spigaroli activities…

While Massimo was the artist, the cook and the agriculturalist, Luciano was the organiser, the administrator and the public relations officer. In this way the Spigaroli brothers have been able to keep everything under their personal control.

When he was young Luciano had no intention of following the activity of his parents. In fact, after completing his secondary education at the Salesiani del San Benedetto in Parma, his enrolment at university to study economics and commerce was taking Luciano in a completely different direction. His studies and football played at an amateur level were his main occupations in those days… interspersed with occasional help for his parents at weekends. 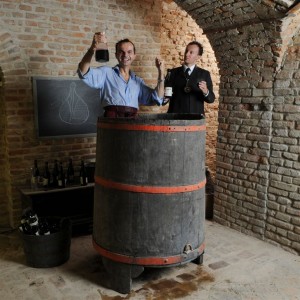 Then the unpredictability of life turned everything on its head. The sudden illness of his parents, and the fact that Massimo found himself single-handedly managing a business that was still at the development stage, made him come to the decision that he should join his brother at the helm of the “Al Cavallino Bianco” restaurant.

That was in 1984 and from that point on the Spigaroli began a continuous growth that is still ongoing. The passing years have seen Luciano continuing to expand his repertoire: sommelier courses, experience gained in the field, the organising of all kinds of events…

Since 1988 Luciano has not been alone in his work, as he has had Antonia by his side. In fact 1988 was a truly important year because Benedetta also arrived, and now she is being groomed to become the fourth generation of the Spigaroli enterprise.

For the clients at the Cavallino Bianco, Luciano is a constant reference point and the familiar face that puts everyone at ease. For any wishing to organise an event of any kind, Luciano is a person who can make a thousand suggestions and propose the ideal solution to make their dreams come true.

The experience of a lifetime spent in the business, his organisational ability, his intuition and perception enable Luciano to guarantee the perfect outcome for any event. His love of beauty, his practicality, his attention to detail, and his respect for his client form the foundation on which Luciano’s work is based. Many couples have placed themselves in his hands to celebrate the most beautiful day of their lives….and from then on Luciano has became a real friend to them.

The pleasure, after many years, of seeing clients who return to the restaurant to celebrate anniversaries, christenings, communions and confirmations is one of the things that motivate Luciano and his family to continue their adventure in a sector that is highly demanding and tiring.